(USA Today) — In Mexico, 43 college students will not be taking their final exams this semester.

The students were detained  over two months ago by local authorities and handed over to the Guerreros Unidos cartel with the approval of the mayor of Iguala.

Students across the U.S. have organized on-campus vigils aimed at raising awareness around the main causes that led to the disappearance of the students.

Many have done so through local clubs and organizations. Others have started their own grassroots movement by mobilizing through social media.

Following the #yamecanse (#wearetired) Twitter movement started by Mexican college students, student groups in the U.S. have started an awareness campaign under its English equivalent of#USTIRED2.

The movement’s goal is to mobilize communities in 43 cities across the country, “1 for each disappeared student in Ayotzinapa.”

Roberto Lovato, a representative of the group and a Visiting Scholar within the Center for Latino Policy Research at U.C. Berkeley, says that the group’s goal is to inform the public of the root causes that led to the Ayotzinapa movement.

He says American foreign policy, like the Merida Initiative, has set the stage for many of the mass-killings that have occurred in Mexico.

“There have been more mass-graves found in the supposed area where the students disappeared than in any other country in Latin America, like Venezuela and Cuba, who are in enmity with the United States.”

“The message is to stop the funding for Pena Nieto that comes from the U.S. taxpayer. Over 100,000 people have been killed in Mexico in less than a decade. 25,000 or so have disappeared.”

Another group by the name of Soy Mexico has pointed to a more precise cause: police brutality.

Through Ustream, the group opened a conversation between the mothers of the disappeared students and the community of Ferguson, Missouri. The moderator, in Spanish, drew a connection between the two situations through what he considered “a cruelty of both government and police.”

Miles away, in Yellow Springs, Ohio, on the campus of Antioch College, Odette Chavez-Mayo felt a connection. 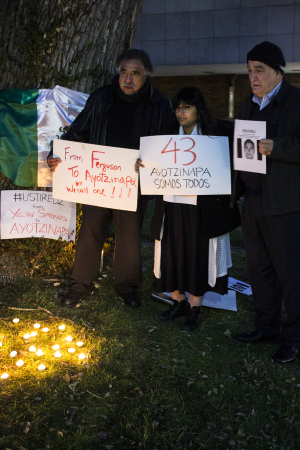 Within a month, she was able to plan a vigil.“I was pretty shocked. I hadn’t heard of anything like this on the media. I started looking at stuff and began organizing.”

A nationwide network of #USTIRED2 activists has sprouted, from Kailua, Hawaii to Harrisonburg, Virginia.

Laura Gonzalez, an education major at Armstrong State University, knows that the Ayotzinapa Movement has hit Latin America at its core.

It has impacted her life deeply since she is a native of Mexico and a soon-to-be teacher.

“I guess there are really no words to express the pain that parents feel when not hearing from their children. They see them as their little kids, my parents would feel the same way,” she said.

“I think no matter what happens people are not going to forget about this. It won’t be for anything. People in other countries are supporting this cause. Their kids are heroes.”

Rolando Zenteno is a contributing writer for USA TODAY College and an undergraduate student at Armstrong Atlantic State University. He currently writes about immigration, sports and politics. He hopes to graduate in 2016 with a major in English and an minor in Spanish. He loves reading anything that falls in the lines of James Baldwin and Malcolm X.
Article originally posted on USA Today College by Rolando Zenteno.